2016 was the year of the underdog. From Iceland’s improbable run during the summer’s Euro League competition to Leicester City’s almost impossible Premiere League Championship, this was the year the newcomers forced their way into the elite club. Be a part of this historic turn of events with these official team jerseys. 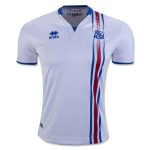 Inspired by the Icelandic national flag, the official away jersey for the tiny Arctic nation is white with sky blue-and-red stylized stripes running through the team’s badge. The inside of the back collar features the words “Fyrir Iceland” which means “For Iceland” in the nation’s official language, Icelandic. There is also a small image of the Icelandic flag on the outside back collar.

Price may vary. The price given is an average price based on our web search. 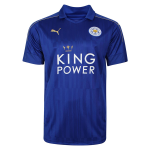 The reigning champs of England will defend their title in this newly design V-neck jersey. Deep blue with all-over vertical striping, the jersey sports the familiar King Power logo prominently on the chest in white lettering, with the Puma logo in gold on the right chest and the Leicester City team seal on the left.

Price may vary. The price given is an average price based on our web search.