It was a very merry Christmas for Brentwood native and soccer phenom Karlie Paschall. Fresh from a trip to Europe with the U.S. Women’s National U18 team in October, Karlie is still on cloud nine after recording her first assist in national team play during the team’s 3-1 win over France in the Women’s International Cup in Northern Ireland. The precocious teenager is still hyped about her performance in that game and believes the assist is a moment she’ll never forget.

“I watch that assist over and over again,” she admits. Her assist came in the 53rd minute with the US up 2-1 over France. With the ball at her feet in U.S. defensive territory close to 20 yards behind the midfield line, Karlie spotted center forward Belle Briede making a run toward goal. “I look up and I’m like ‘all right, I’m just going to go for it.’ We’re up 2-1 and I’d rather lost the ball in their end than in ours,” she says. “So I hit this ball and Belle runs on to it and ends up scoring and we go up 3-1.

“That moment was so incredible,” she adds. “Just to be playing against France and getting an assist in a game a center back shouldn’t get an assist in was just really awesome for me.” 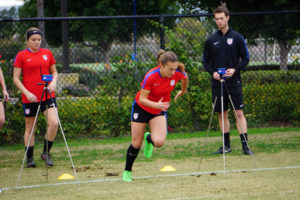 Soccer is a game of skill and speed. Paschall runs the 20-yard dash at the last U18 camp in December 2016 for fitness testing.

The tournament is just another milestone in the remarkable career of one of Tennessee’s premiere youth soccer players. Karlie’s list of accomplishments and awards are a country mile long and include the following: seven club state championships, four regional championships, one national championship, three-time Tennessean All-Midstate selection, and 2016 American Family Insurance All-USA Preseason Girls Soccer Team. By the time she began her senior year at Ravenwood High School in Brentwood, she had scored 69 goals, had already committed to play college soccer at Duke University, and had been a member of four youth national teams — U14, U15, U17, and U18. Not even old enough to vote, Karlie’s soccer career has been one heck of a wild ride. Not bad for a kid who got noticed playing a different sport entirely — basketball.

While playing in a youth basketball game when she was 8 years old, Karlie was spotted by the father of a player on the opposing team, a soccer coach who believed her athleticism was perfect for soccer. He approached Karlie’s parents after the game and encouraged them to have their daughter try out for his travel club team. It didn’t take long for the youngster to realize she had found her passion in life. “I loved it and soccer immediately clicked with me as soon as I stepped out on the field,” Karlie Says. “Soccer has always been my biggest passion and I’ve always just had a love for the game.” 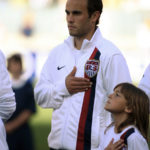 Young Karlie Paschall stands beside U.S. soccer legend Landon Donovan as a ball girl for the USMNT during a match at Nissan Stadium in Nashville.

That passion really and truly bordered on obsession. From third through fifth grade, Karlie would wake up an hour early and play soccer in the yard with her father before the school bus arrived, when she would hop on with her soccer ball lunch box. For Karlie, soccer was all-encompassing. “I dedicated hours of my life every single day just to kicking a ball against the wall and just training to get better,” she says. “I didn’t know what my potential was and, honestly, I really didn’t care just because I loved it so much. If this takes me far, great. If it doesn’t, great. I just want to play.”

The hours Karlie spent training and with a ball at her feet paid off. By eighth grade, she was being recruited by college coaches and was gaining notice by US Soccer coaches as well. At the age of 13, she was called up to train with the U14 team and progressed quickly up the ranks to the U15 team. She was soon called up to train with the U17 team a year ahead of schedule, earning her first CAP on February 5, 2014, in a game against China. Karlie stayed with the U17 team for two more years, earning significant playing time. Assuming that she had performed well enough to make the final World Cup qualifying roster, Karlie received some bad news from head coach B.J. Snow. “It was the final training camp before BJ Snow made the roster and he sits me down and he said ‘Karlie, we’re evaluating you at two different positions and that’s a unique situation for you to be in, but I wanted you to know you didn’t make the roster,’ ” she remembers. 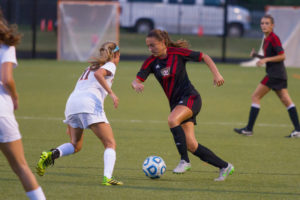 Paschall takes on a defender as a high school senior with Ravenwood Soccer.

“Honestly, at the time I didn’t know why that happened,” she explains. “I was a staple, I was a leader, I thought I was captain material, a lot of the girls looked up to me. I was performing well, I was fit. I was just super confused. Looking at it now, I realize that was probably the best thing that could ever have happened to me as a soccer player.”

During a period of introspection, Karlie realized her priorities were out of whack. A Christian, Karlie realized her faith in Christ had taken a distant second place to soccer. “I really think for about two years I put soccer above my faith and I think when I got cut that was just kind of the Lord’s way of saying ‘Karlie, come back to me and I will give you the desires of your heart if you just follow me first,’ ” she says. “I started putting my faith first and soccer second and I pursued Jesus above everything. I can honestly say that getting cut from that team was the worst moment of my life but it was the first line in my testimony.” 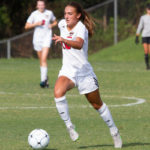 Below: Paschall is all concentration as she prepares to dribble at the defense during on of her first home games of her senior season for Ravenwood Soccer.

Karlie also realized she had become complacent in her training — although complacent for Karlie would still be overzealous for most people. While she continued training hard, doing extra workouts, and working to improve her ball skills, she says that, looking back on it, she had lost her “edge.” She began keeping a training journal tracking her workouts, nutrition, and even her moods. She started using a heart monitor to track her fitness levels, training two to three times a day in an effort to improve her game as much as possible. The hard work and time in prayer and meditation have paid enormous dividends. She received a scholarship to play forward with Duke and, last year, received an invitation by head coach April Heinrichs to join the US Women’s U18 team, culminating in the fall trip to Northern Ireland. Getting a much-deserved break for the holidays, Karlie will be back in camp with the U18 team in February for more training and competition, all with a smile on her face, excitement in her heart, and the word ‘burnout’ nowhere in her vocabulary.

“I know what my reason for being is and I think that’s why I’m still passionate about soccer. When you know what your purpose is, your purpose drives your passion,” she says. “It’s been quite a journey, but it’s been really good. It’s taught me a lot about myself more than anything. I couldn’t ask for more.” 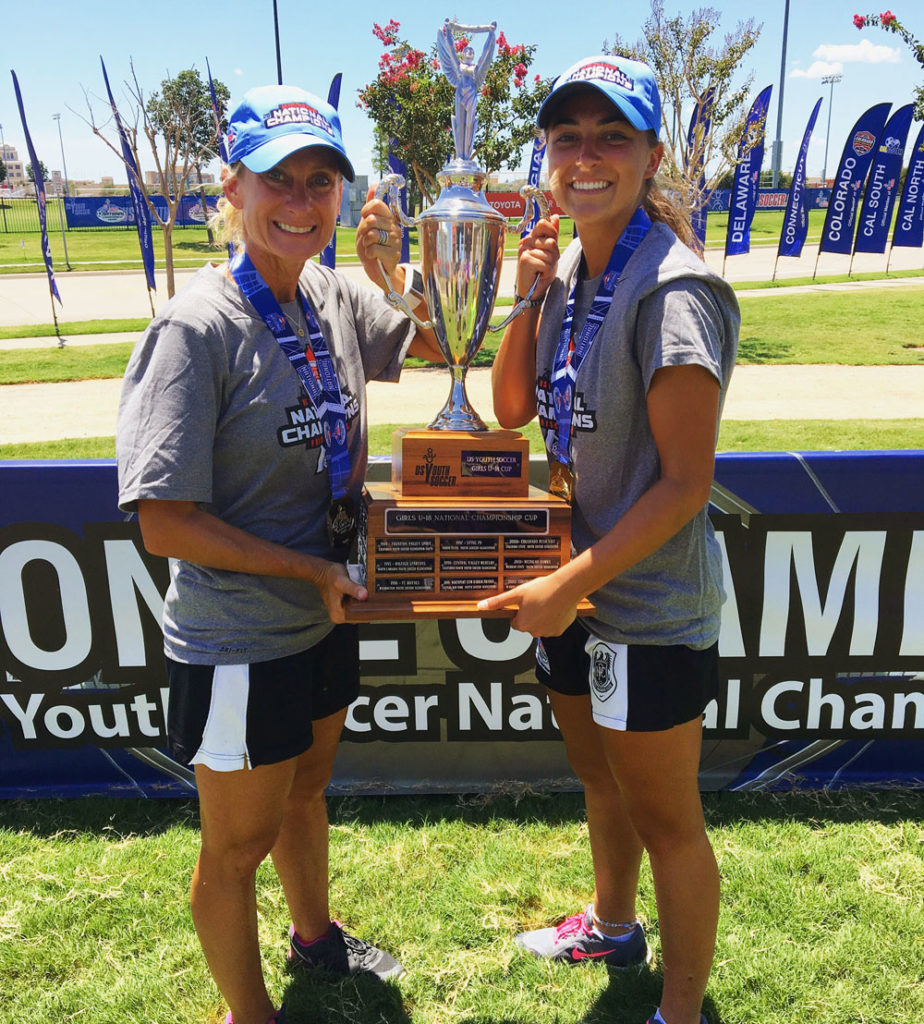 Karlie Paschall celebrates with her coach and Duke Women’s Soccer alumna Ronnie Woodard after winning the U18 National Championship.