After disastrous play and embarrassing off-field distractions, the US Women rebound against the Netherlands during a rainy night in Georgia

While a couple of weeks in the sunny climes of Rio would do most people a world of good, the Cidade Maravilhosa wasn’t so kind to the United States Women’s National Soccer Team. The odds-on favorite to leave Brazil with shiny new medals around their necks, the team’s 4-3 loss to Sweden in the quarterfinals meant the US women would endure their worst Olympics to date, failing to qualify for the gold medal round for the first time. It wasn’t exactly a summer to remember.

“It’s such an honor to put on this jersey and play for your country, but to do it in front of friends and family, it just means so much.” Morgan Brian

Drama happening off the field overshadowed the on-the-field issues. Case in point, starting goalkeeper Hope Solo got herself into hot water due to some poor sportsmanship and unkind post-game comments in which she called Sweden “a bunch of cowards.” A pending assault charge following a 2015 incident with Hope’s sister and nephew also provided more than enough distractions for the USWNT. By the time the 2016 Olympics came to a close, it was clear the USWNT couldn’t get out of Brazil fast enough.

Time to regroup and start building for the future.

In September, the USWNT scheduled a pair of friendlies. The first was a match against Thailand in Columbus, Ohio, on September 15. The U.S. won handily, 9-0. The next contest scheduled for just three days later would be far more difficult — a date with the Netherlands in Atlanta. 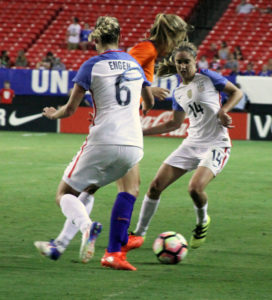 The afternoon of Sunday, Sept. 18, was wet, stormy, and, gloomy with rain coming blindingly hard at times. Fortunately, the US’s game with the Netherlands was indoors at the Georgia Dome just a stone’s throw from the city’s new multi-purpose stadium, Mercedes-Benz Stadium. The construction scene is a fitting metaphor for tonight’s game. As crews work to build the structure to prepare for the city’s new MLS team — Atlanta United FC — head coach Jill Ellis is planning for the future of the U.S. Women’s National Team as well.

The roster that evening included a group of younger national team players and new call-ups, all hoping to impress the coaching staff and earn more playing time as a handful of competitive tournaments begin popping up on the schedule in 2017. Included on the active roster were a pair of Georgians, Morgan Brian and Emily Sonnett, who were thrilled to be on home turf playing for the U.S.A.

“It’s such an honor to put on this jersey and play for your country, but to do it in front of friends and family, it just means so much,” says Brian. A native of St. Simons, Georgia, Brian, 23, is a starting midfielder on the USWNT, having first made the leap from the U20 squad in 2013. At the time of this writing, she’s made 63 appearances with the USWNT, and logged six goals with the senior squad. She was also a member of the 2015 team that won the 2015 Word Cup in Canada. Even with the success on the international level, playing in front of loved ones is a huge thrill. “My friends and family helped get me here. So to be able to play in front of them in Atlanta, and my parents live here now, so it’s a pretty special place for me,” Brian said.

Earlier in the spring, Brian missed a few games due to a hamstring injury but was fit in time for the Olympics in Rio, recording an assist in the team’s opening match against New Zealand. A talented midfielder with excellent defensive instincts and great vision, Ellis believes Morgan — whom she calls “Mo” — has the talent and attitude to be a leader. “I thought Mo (Morgan) grew in the game. She’s been out a little bit, but I thought she grew in the game and I thought she was very, very good,” Ellis says. After a solid performance holding down the midfield, Ellis took Brian out of the game midway through the second half, with an ulterior motive in mind. “I kind of teased her; I said ‘I took you out so you would get a standing (ovation)’.” 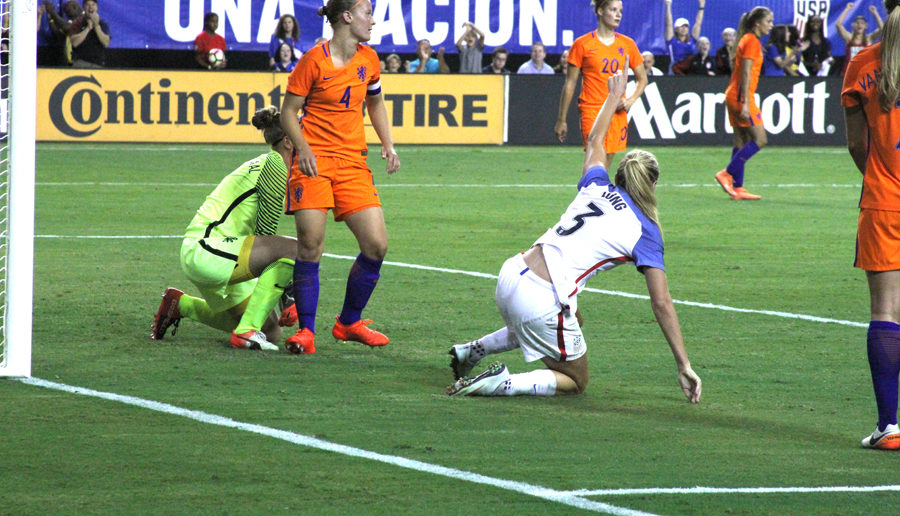 “I did laugh about that a little bit,” says Brian. “I was kind of clapping but I really didn’t want to clap. It was awesome to be able to come off the field in Atlanta.”

Emily Sonnett came into the game in the second half and had an immediate impact, connecting on a header that just sailed over the bar, coming within inches of scoring a goal in front of her home crowd. “So close, right?” said Sonnett after the game. “It was a perfect ball and just didn’t put enough on it, but it was super awesome to be able to have a chance like that in the Georgia Dome.”

A native of Marietta, Sonnett earned three appearances with the U23 team before getting her first call-up to the senior squad in October 2015. Since then, she’s appeared in 12 games and was an alternate for the USWNT in the Olympics. Her performance added a spark that caught Ellis’ eye. “I think (Sonnett) came in and added another dimension to our game,” Ellis says. “I thought she did exceptionally well.”

By the time she came on the field in Atlanta, Sonnett had been a part of the USWNT for about a year. She says learning to play the international game has had its challenges, however, she says she is becoming more accustomed to her role and being a part of the world’s most successful women’s national team. “I think I’m getting more comfortable and being able to play with the best women in the world, it’s an honor,” Sonnet says. “It was awesome being able to come back especially with the U.S. team in the state of Georgia. There are no other words for it. It’s just very exciting.”

As for the action on the field, it took some time for the USWNT to find themselves, spending the first 20 minutes of the contest looking slow and lethargic as the Netherlands controlled the ball and the pace of play in the early going. Netherlands striker Shanice van de Sanden surprised the U.S., and the nearly 20,000 fans in attendance, by scoring in the first two minutes of the contest.

However, by the midway point of the first half, the U.S. found its chemistry and picked up their energy level, pulling the game to a 1-1 draw as Carli Lloyd put one in the back of the net in the 35th minute. The second half, however, is when the U.S. finally came alive, putting pressure on the Netherlands’ defense and controlling the ball for the remainder of the game. Their aggressiveness paid off in the 50th minute as the U.S. forced an own goal off of Netherlands defender Mandy van den Berg to go up 2-1. In the 77th minute, Allie Long scored to put the game away as the U.S. cruised to victory over the Netherlands, 3-1. For the coaching staff and the players, the difference between the UWNT’s performance in the second half made all the difference.

“I think the first half we were a little bit disoriented and we struggled,” says Brian. “Once we opened play a bit and we opened spaces up and had different movements I think that we really found our groove and played the ball. I think we had some really good chances as well and we put away our chances. That’s the difference.” 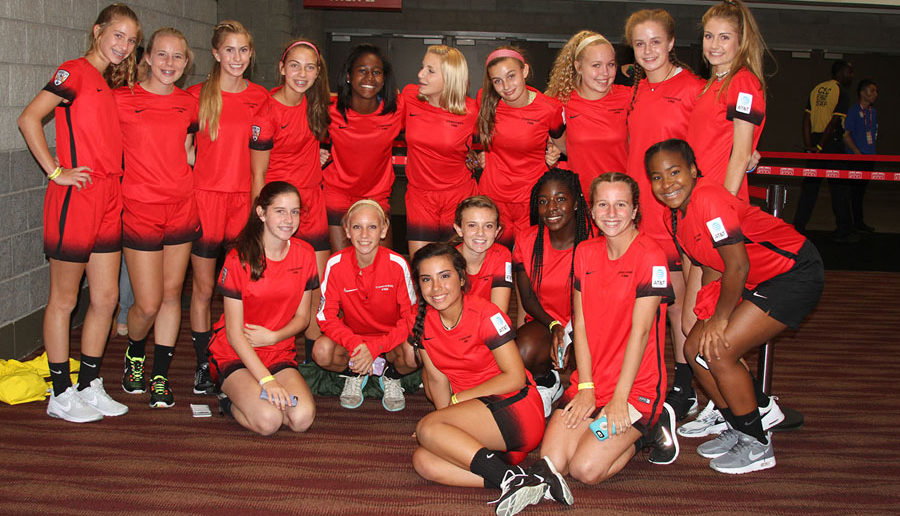 Girls Get Chance To See Big-Time Soccer Up Very Close

As ball girls for the big-time game, Concorde Fire U14 Central Elite girls were in the thick of the action from the anthem to the end

In the stands of the Georgia Dome for the US Women’s National Team friendly with the Netherlands were thousands of youth soccer players all decked out in their uniforms and holding signs supporting their favorite players.

However, one group of young ladies had the chance to be up-close and personal during the match. The Concorde Fire Soccer Association U14 Central Elite team served as ball girls for the game, and had the opportunity to line with both teams during the national anthem, pose for photos, and see their heroes play just a few feet from where they stood during the game. It was an exciting night for these girls, including Delaney Doss and Ryleigh Jenkins, an experience they will never forget.

“It’s really cool to see them play because we’ve looked up to them all of our lives, and it just seemed so real to see them in person,” says Delaney, a 13-year-old midfielder on the Concorde Fire U14 squad. “It was fun to hand them the balls and just make eye contact with them.”

With dreams of playing for the Women’s National Team one day, Delaney says her favorite player on the current roster is Georgia native Morgan Brian. “I just like the style of play she uses. I like how she moves the ball,” she says.

For 14-year-old Ryleigh, the experience has motivated her to become a better soccer player. “It was incredible to be that close to all the girls on the field,” she says. “It really does inspire me to work a lot harder and improve on my foot skills.”

Ryleigh plays mostly outside back for the Concorde Fire, but also plays some outside midfielder. Her favorite player is Tobin Heath, an aggressive midfielder and professional player with the Portland Thorns FC of the National Women’s Soccer League. “I really like Tobin Heath because she’s an outside mid and that’s my favorite position,” she says. “She’s really skilled with the ball and I just think that’s really cool how good she is with her feet.”

Soccer in the South